An atmospheric introduction to the world of Dark Souls with some incredible moments that show you exactly what you are getting into.  Let down a little by being a bit generic and some odd design choices during the battle with The Asylum Demon.

Number of Deaths – 0 (died much more on my first playthrough)

Atmosphere is the main component that elevates the Soulsborne games for me over other games.  Well, the Northern Undead Asylum does a good job of introducing that atmosphere.  Things are immediately oppressive as you are locked away in a cell.  To make things worse, you can hear the Stray Demon’s thunderous footsteps from your cell.  Can you imagine being an actual prisoner at this asylum and having to hear that asshole all day long??  Kinda implies that your stay here is not gonna be pleasant.  At least the player character’s cell is tucked away at the end of the hall–those poor Hollows who upgraded to the luxury cells in the hallway have to watch the Stray Demon stomp around.

In a great touch, the ruckus caused by the Stray Demon can be heard throughout the asylum.  Obviously, you can hear him in the beginning;  you can hear him when you get into the courtyard;  you can even hear him after beating up his weaker sibling, the Asylum Demon.  I’d be curious how many people even noticed his footsteps at that point.  I sure as hell didn’t when I first beat the Asylum Demon–I’d assumed I’d just killed that same guy who had been patrolling downstairs and never asked myself “how did he end up jumping down on me like that”? 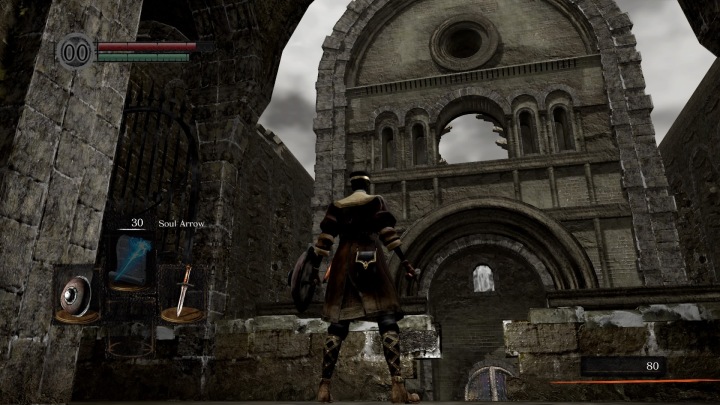 Stray Demon aside, the rest of the atmosphere in this area is pretty good.  The FromSoftware staple of beautiful, crumbling architecture is in full effect, particularly once you exit the Asylum and can see the exterior along with the mountain graveyard.  There is a real sense of isolation which is enhanced by the scarcity of enemies in this level and by the wind pounding on the buildings.  That feeling of isolation effectively conveys the message that everyone locked away here is an outcast.  My only issue with the atmosphere is that it’s on the lower end in terms of creativity.   This issue affects my “Level Design” score much more though…

This may be unfair but I felt like the Demon’s Souls tutorial level was much more unique in terms of geographical layout.  The Undead Asylum is good thematically and for atmosphere but I feel like the path through the level is unmemorable and generic.  You break out, walk down hallways, circle around the asylum, and finally leave.  It lacks that creative spark that the best levels have.  And while I really like the boulder trap, I  dislike that you only find Oscar of Astora and his precious Estus Flasks because of the boulder knocking down a wall.  Dark Souls usually has much more natural level design and progression but that sequence feels very gamey to me.

Difficulty-wise, its a bit easy especially when I compare it to Demon’s Souls where you are essentially forced to die to Vanguard.  Then again, I’m looking at it from the lens of someone who’s played it before.  I’m sure the Asylum Demon owned me my first time through and I know I died to that boulder.  It’s as hard as it needs to be for a tutorial level.

There are some nice spicy bits to the level design.  You get your first look at how interconnected the levels are when you circle around and unlock the shortcut back to the first bonfire.  It’s not as jaw-dropping as when you first climb the ladder down from the Hellkite Dragon bridge but it’s a good start.

More good stuff:  that ambush by the Asylum Demon is phenomenal.  It’s a panic-inducing moment and it serves to keep you on your toes for the rest of your time in Lordran.  And finally, the fact that there is a hidden area that you have to discover later is a good touch.  All of these things and the fact that its a tutorial level help it achieve a reasonable score.

Not much to talk about here.  The Hollows are well designed which is an underrated achievement.  It takes skill to make generic zombies interesting and the designer made these guys the perfect mix of undignified wretchedness.

But in the end, they are just zombies–as well designed as they are, this game has much more interesting enemies later on.

In terms of combat situations, things are extremely mild.  I think you have a couple sword swinging Hollows, one bow & arrow Hollow, and one spear and shield Hollow.  Not all that challenging (though that last guy can be a pain) but it’s fine for a tutorial.

This is tough.  I love the design of The Asylum Demon.  He’s huge, he’s hideous, and he has all of these nice little touches to his design.  That grin of his is terrifying and the wings, horns and bones protruding from his limbs give him a odd skeletal look which contrasts beautifully with the fact that he’s a giant, gluttonous, fat tub of flesh.

That initial ambush by him is executed perfectly.  You go from expecting something when you enter the building to being relieved when the room is empty to nearly shitting your pants in about five seconds.  And its so overwhelming!  Should his attacks miss you, you get these huge mounds of debris and dirt spraying everywhere while columns are shattering all over the place.  His move-set is visually pleasing…they are giant, sweeping movements that are terrifying for a first-time player but he telegraphs his moves enough to give you a fighting chance. Your initial battle with him is pure, blissful spectacle even if you most likely will end up dead immediately.

When you go to fight The Asylum Demon for real, a few design choices really bring him down a notch.  First, why the hell does the plunging attack do that much damage to him???  It knocks out nearly half of his health which I feel goes against how much of a beefcake the game was making him seem like before.  I would have preferred they nerf that attack and make you have to deal with him more mano-a-mano (I just choose to not use the plunge attack when I fight him).

But worse than that, why can my low level character block his attacks with a tiny buckler and take no damage?!  This giant beast has so much strength that he knocks down columns left and right.  His sheer might is (probably) the reason the floor is weakened so much that when you show up later, you end up accidentally ambushing his much more powerful brother.  He wields a gigantic mace; yet when he powers up for a sledgehammer hit, somehow my mighty buckler stops it with nary a scratch.  Makes no sense.   Honestly, I just wish the battle with him here was a bit tougher.

But luckily, the introduction and initial encounter with The Asylum Demon overshadow my issues just enough to get a decent score.