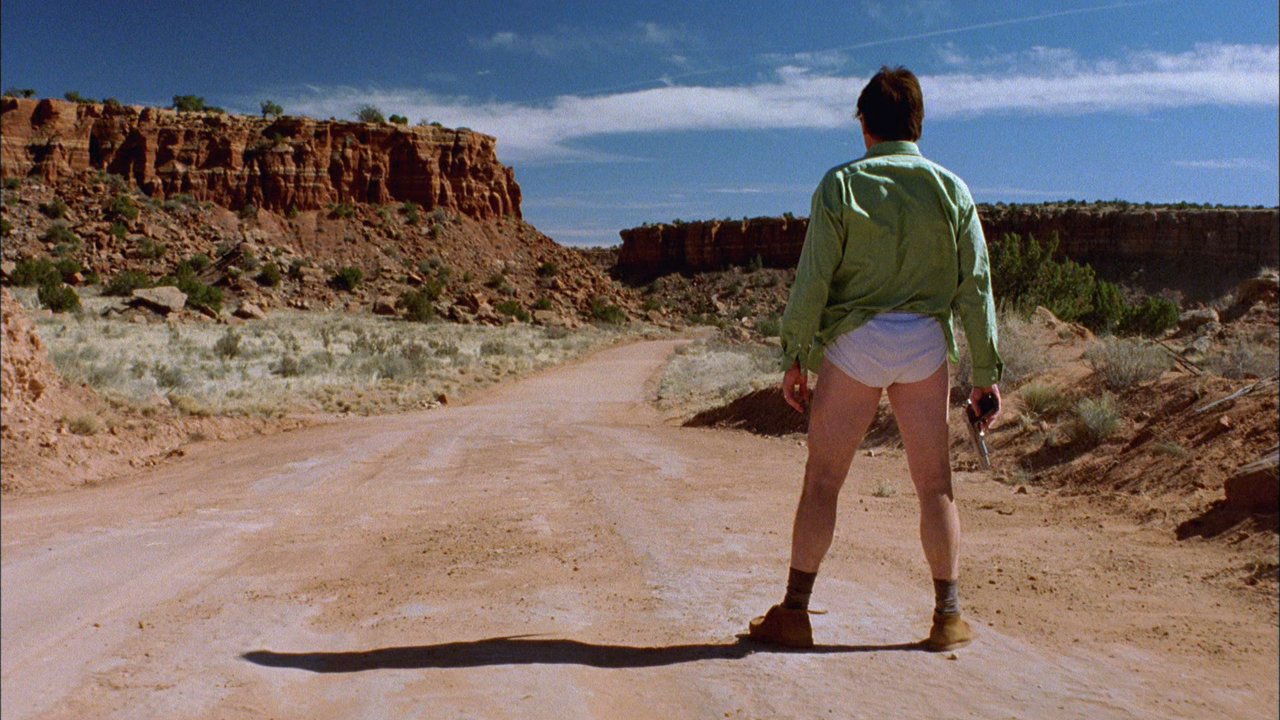 Breaking Bad is my favorite show ever. For the longest time, I tried to resist and stick with my nostalgic pick of the X-Files. At one point, I almost would have said the Wire because no show has ever felt like the Wire to me. But Breaking Bad is the show I come back to again and again. I just cannot get enough of the action-reaction characterizations and drama that this show has. I mean there really is no other show that I’d feel like spending my free time writing about for no actual reason so that says something. And what better way to start than with the Pilot?

And what an unorthodox beginning to a show,  what with Walt speeding around in an RV, dressed in only his tightie whities, a couple of bodies sloshing around in the back of the vehicle. It’s such a bizarre and frenetic scene and, coupled with his great confession to his family and that badass image of him pointing the gun at the sirens, does a fantastic job of making you wonder “whaaaat is happening?” (in a good way). 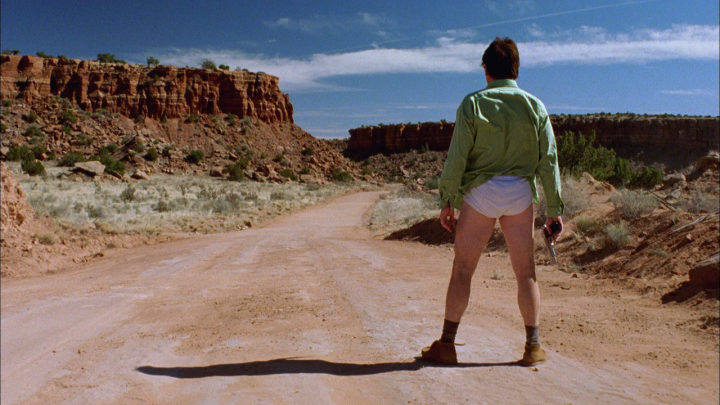 How could the above possibly not warrant further explanation??

And answering that question is what this episode does masterfully. We get a perfectly paced introduction to Walt’s life and his family as well as various hints at the kind of guy he is behind the bumbling, goodie two shoes veneer. Some of it won’t be clear until later episodes, but even here, Walt is not just written as a nice guy dealt a bad hand. He’s written as a sympathetic guy with very tangible character flaws. He’s established as being extremely smart, with his plaque for contributing to a Nobel Prize, his moments of teaching Chemistry to his students, and his ability to “be the goddamn Iron Chef” per Jessie when it comes to cooking meth. With his intelligence though comes a subtle (and not so subtle) superiority complex. It is just barely there with his frustration at his students who don’t share his passion for chemistry but it is completely unleashed whenever he is around Jessie. His entire demeanor is condescending, from berating Jessie on his lack of proper lab protocol to the fact that he outright blackmails Jessie just so he can start making money. He tells Jessie that he didn’t expect him to amount to anything which apparently justifies treating him like crap throughout the episode.

Meanwhile, his insecurity is on full display during his birthday party around Hank (though based on how poorly and tool-like Hank is written here, I don’t know how anyone would be comfortable around him). And his passivity around Skyler, whether it is casually accepting a substandard vegetarian breakfast on his birthday or casually accepting a disinterested handjob, also on his birthday, is pretty striking (and definitely plays into his “I don’t control my life except for when I am involved in my illegal drug manufacturing side job” mindset). Basically, we are given a character for whom it makes sense that he would decide he needs something more and Bryan Cranston plays it perfectly. 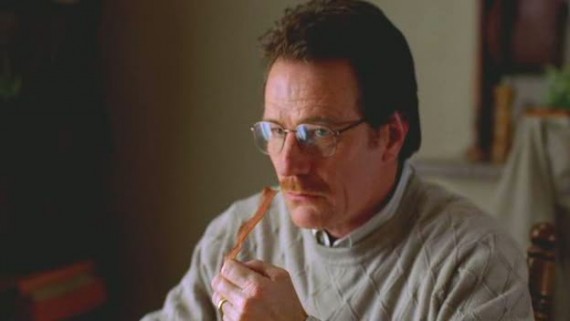 A man can only be pushed so far…

The rest of the episode works very well, though not quite as well as Walt’s character building. The plot moves expediently as we speed through Walt’s reaction to this life altering news. We get his tirade towards Bogdan, his assault on the asshole bullies at the department store, and, of course, his decision to team up with his former deadbeat student to cook meth. Yet none of it seems rushed because of the great writing and acting.

Speaking of the deadbeat student, Jessie and Walt’s interactions are another strong aspect of the episode. Their chemistry is spot-on from the beginning and Walt’s derision towards Jessie is always entertaining. He has some priceless moments like his befuddlement at Walt’s reasoning for cooking meth and his cow-house comments. He isn’t very developed yet, but he’s entertaining in this episode.

The same can’t be said of the rest of the main cast. Walt Jr. is introduced as a good-natured kid with some good banter with his parents but nothing much of any substance is provided to him as a character. Marie isn’t given much to do but in her roughly two minutes of screen-time, she comes off as very one-dimensional and like a throw-away character. At least her one dimension isn’t too annoying though. Hank’s is basically there to LOUDLY SCREAM OUT how different he is from Walt. Need Walt to not seem tough? Let’s have Hank tossing around his gun and bragging about firearms at a party to impress his nephew. Need Walt to seem like a pushover? Let’s have Hank drink Walt’s beer at his own 50th birthday party like some overgrown frat boy. 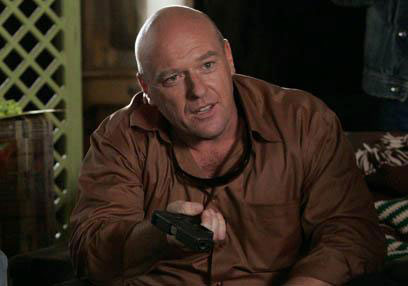 Skyler comes off better. She is much more prevalent than Hank or Marie and subtly gives off the impression that she basically runs Walt’s life, though not maliciously. Just little things like giving Walt the amazing birthday breakfast of veggie bacon (I would be pretty pissed if this happened to me on my birthday) and chiding Walt at using the wrong credit card give us a good view at their marriage. The handjob scene though…it’s a funny scene but I feel like it veers so far towards the comedy that it undermines her characterization. She comes off as tone-deaf and completely insensitive. Basically, Walt (and Jessie to a lesser extent) are written with nuance and care while the rest of the characters are a bit rushed and over the top in this episode.

Drama-wise, this episode suffers a bit from being a pilot episode because it can’t reach the level of tension that future episodes will. Walt’s cancer diagnosis and his situation both are well established but in terms of immediate drama, the episode is merely good rather than fantastic. Part of that may be the choice to have the flash-forward in the teaser which marginalizes the intensity of the action scenes in the final act. However, I think that was a good choice because the teaser colors the rest of the episode in a very “how the hell did we get there??” way.  Plus, it was a shock to me that the teaser wasn’t from the end of the season but merely to the end of the episode. The fact that the episode made it to that point without feeling contrived is incredible. 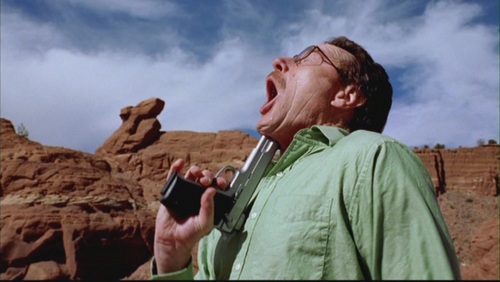 “OMG how the hell are we gonna top this for the rest of the season?!”

All in all, a good episode (and great pilot) that firmly establishes the world and creates one of the greatest characters ever in Walter White. There are some minor quibbles with the supporting characters and the drama not being quite as compelling as future episodes but this episode does the job of setting up the greatest show ever.